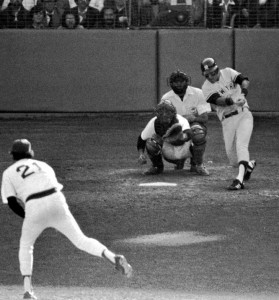 There he was, Bucky Dent—the hero of the 1978 American League East tie-breaker game, 1978 World Series MVP, and three-time All-Star—standing in front of us!  Not necessarily an imposing figure, but definitely a historic figure—at least as far as New York Yankees fans are concerned!  While the spirit of his keynote address at the 2010 Club Industry East was to talk about his baseball camps—come on folks, Bucky wasn’t going to escape without engaging in some pure baseball talk!

I couldn’t help but to shoot my hand up and ask a question for which there was only one correct answer—Bucky’s answer:

Dr. Sherman:  What does it feel like to hit a Major League home run?

Bucky Dent:  It’s magical!  I always wanted to be like [my boyhood hero] Mickey Mantle.  Home runs, the World Series, the Yankees—I achieved all three.  When I hit the home run in the tie-breaker game, I didn’t know if it would be a home run when I hit it.   I really didn’t see where the ball was going because I was running so hard.  When I knew it was a home run, I got flashbacks to when I was a kid—thinking about hitting that game winning home run, like Mickey used to do.

Attendee:  Bucky, is it true that you were using Mickey Rivers’ bat when you hit your famous home run?

Attendee:  What do you remember about your teammate Thurman Munson [who died in a plane crash at age 32, in 1979]?

Bucky Dent:  Thurman was a “tiger.”  He was a very hard-nosed ball player.  I still remember where I was when I heard he died.

Thanks, Bucky, for bring your resume´ to life.  I truly enjoyed your great presentation.