I selected Booth #426, to exhibit the GymValet Equipment Cleaning System, at the 2010 National Fitness Trade Show because it positioned me in the perfect location to meet and greet the contestants and guests as they waited to enter the Awards Banquet.  I’ve posted the three pictures below to show you some of the contestants in a way that you won’t see when Ms. Fitness is broadcast on Fox Sports Network (FSN)–in their formal attire.  Obviously, pictures are worth thousands of words, but, paraphrasing the words of Paul Harvey, let me tell you the rest of the story.  Read on below the pictures… 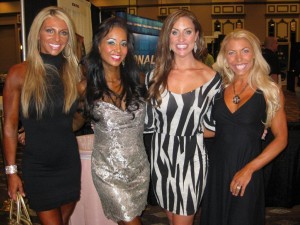 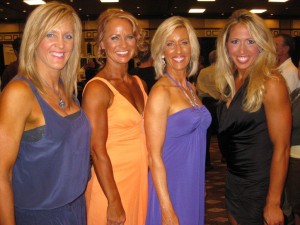 First of all, I found all of the contestants to be very friendly, and they LOVE to have their picture taken!  As I spoke to them, after the obligatory picture taking/posing,  I took the approach of talking to athletes–respecting the countless hours and years of training that led the contestants to the National finals.  If you are not familiar with Ms. Fitness USA, competitors make the finals through a series of regional qualifying events.   These are serious competitors!  I find it interesting, however, that many of them are not fitness professionals; many have full time jobs, and families–one of the washboard-abs. set has 5 children!   This is a competition where the contestants have to be trained, toned and fit from head to toe, as they are “exposed” and judged during the posing and fitness routine parts of the competition.  Oh…don’t forget the personality component either; the contestants are also interviewed regarding how they  inspire, and motivate OTHERS to pursue healthy lifechoices and lifestyles.

The other part of the pre-banquet “social hour” that I found interesting was watching and listening to the competitors interact among themselves.  This event reminded me of the pre-event “scene” that I’ve experienced over the 30+ years of my competitive athletic career as a runner and triathlete:  There was the obligatory “sizing” up the competition, catching up on personal details and current events, and a little discussion about “where are you going next.”  Enjoyable gamesmanship!

Having exhibited in the same exact spot in 2009, I found myself getting wrapped up in the “Nice to see you again” game.  There were several familiar faces from last year, and it was fun to chat with the contestants I met last year to learn about their relative state of preparedness and expectations for the 2010 show.   I was also able to get the “insider’s” view on who were the women to beat.  I’m not sure, however, if the Sports Book at the Grand Sierra was set up for paramutual wagering on the competition…??

The last thing I want to comment on are the “TANS.”  I was pleased to see that the majority of the tans came from tan-in-a-bottle!  I was told that “tanned” skin looks better on TV.  What I found to be most interesting and astonishing was how quickly the tans disappeared after the competition.  I spoke with one contestant the day after the show, and she described how good it felt, once she was done competing, to scrub-off the tan and send it down the drain.  She was very happy with how she competed, so the post-show shower was her reward for a job well done!

Previous post: MRSA, Again! Clean Up Your Act, and Your Equipment, Too.