GymValet on “The Biggest Loser”

It is no secret that I am a huge fan of The Biggest Loser (TBL).  I have gone on the record several times stating that The Biggest Loser should be required watching for ALL health/fitness/wellness industry professional.  Millions of overweight/obese and out of shape Americans watch the show every week–desirous of shaping-up and slimming-down.  It is up to industry professionals to put TBL message–long-lasting life-change through proper exercise, proper nutrition, and behavior modification–for the millions of TBL wanna-be’s who don’t/can’t make it on to the show!! 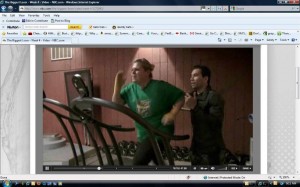 The real purpose of this post, however, is to brag a bit!  If you didn’t catch it, my product the GymValet–bottle and towel holder that attaches to virtually all exercise equipment– made its Biggest Loser, and national TV, debut on the January 25th episode.  It happened during a segment that showed the “Unknown” contestants working out at the off-campus site with the “unknown” trainers.  If you saw (trainer) Brett “inspiring”  Jen (AKA kicking her butt) on the Woodway Curve treadmill you saw the GymValet.  Over the past year Woodway Treadmills have attached a GymValet to every Curve that leaves the (Woodway) factory.  As a bit of background, the Curve is a simple (simply effective) non-motorized treadmill that moves only under the exerciser’s power.  In its design simplicity, the curve’s original design did not include a built-in water/disinfectant spray bottle holder.  The quick thinking minds at Woodway saw no reason to re-engineer the Curve, just attach a GymValet.  Problem solved!!!

This is the first TBL season that has used the Woodway Curve treadmill.  So I was very curious to see if and when the GymValet would make its debut.  Can you imagine my excitement when I saw Jen running on the Curve AND saw the GymValet!  WOW!!!  To (more) formally document the debut, I captured a few frames of the big event off of the on-line broadcast of the episode.

Over the past few years, I have had the privilege to meet and speak with two Biggest Loser winners—Bill Germanakos and Ali Vincent.  Now, Bill and Ali can say that they had the privilege of meeting the inventor of the GymValet! 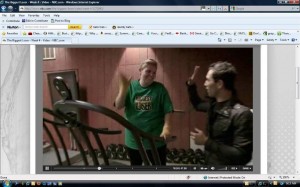 Here’s to hoping that we get a few more glimpses of the GymValet on The Biggest Loser.  Keep watching!  High 5’s all around!!