Dr. Bruce Says…Drivers! Wake Up and Wise Up! Thank you. 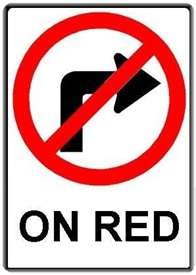 Based on the fact that I had THREE “close encounters of the automobile-runner kind” yesterday morning–during a 10 minute period, I am now in favor of putting up more of these signs on the roads of America!

There I was minding my own business running, in the crosswalks, across intersections with the light in my favor and the little white “cross now” man brightly illuminated on the crosswalk signs when unthinking, non-observing, pedestrian-oblivious, gotta-get-to-work-at-all-costs, drivers came zooming into my intersection–causing me to jump out of the way to prevent getting hit and provoking me to express my “upset” by banging on the passenger windows of one car and banging on the trunk of another car to get the drivers’ attention and possibly get them to think about the proper way to turn right on red that they learned in drivers’ education class if they were paying attention and not texting and driving with the instructor in the passenger seat oblivious to the instructor’s instructions, and then to top it off a few minutes later I was inches from being splattered by a driver taking the hypotenuse of a left hand turn into a parking lot I was exiting (not squaring off the turn) and he was so close that when I put my left hand out to wave him over to his right my hand whacked his driver’s side mirror causing me to follow him back in to the parking lot and politely remind him to not cut his turns so tightly.

So there…to hell with the periods.  I just had to get it off my chest!!

Let’s all share the roads–safely–folks.  Turn right on red exercising proper caution.  Run/walk across intersections respecting the traffic signals.  Square off left hand turns.  And, don’t bang on cars or chase drivers into parking lots–the drivers may have something in their cars that goes BANG!, too.

Comments on this entry are closed.

Previous post: One Third of a Century–The Streak Runs On!