Fifty years ago today, as I sat in my third grade classroom–it was a cold and gloomy Friday–when Bob the (school’s) janitor came into the room announcing that the President had been shot and killed.  I can’t quite recall the immediate reaction of my classmates, teacher, and family (for that matter); it was shocking, stunning and confusing, all at the same time–especially for a third grader.  I do remember the ensuing days, when all of the television networks covered the President’s assassination all-day long–we watched as much as we could on our black and white televisions.   That’s my memory…

Now, let me jump ahead 13 years–moving from the somber to the “unique.”  I was on a spring break trip to Jamaica with five other guys from Miami University. 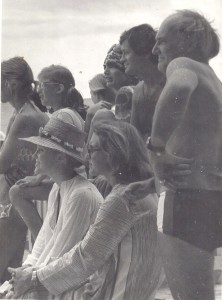 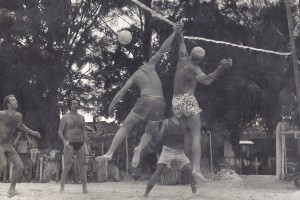 We were on the beach in Negril–NOTE: at that time Negril was primitive and secluded to say the least; not the resort-filled tourist magnet that it is today–when a posse of people strolled on to “our” beach asking us if they could join us in our volleyball game.  Who were we to say “No,” especially when among the group were Jackie Kennedy Onassis, her son John, Jr., and Peter Duchin (famed pianist and band leader).  There were “players” and there were “spectators.”    Obviously, this was a better time  for all…and a lot of fun, too!  And I had a camera!!

So as we mark the 50th anniversary of JFK’s assassination, it is with great pride that I post two pictures I’ve cherished for the past 37 years.  My documentation of our brush with “Camelot.”  What makes the pictures more special is the fact that  I developed the film and printed the images myself.